skip to main | skip to sidebar

Introduction To The Beck Protocol 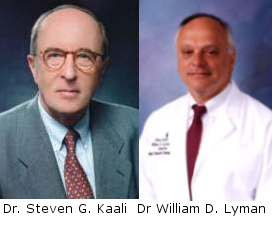 In 1990 Dr. Steven Kaali and Dr. William Lyman at Albert Einstein Medicine College in New York City, conducted an experiment where a petrie dish of blood laced with the HIV virus was exposed to a small electric current. They found that virtually all of the virus cells were adversely affected while the healthy blood cells were unharmed. In technical terms, the electric current modified the outer protein layer of the virus so that it could no longer produce the "reverse-transcriptase" enzyme necessary for the virus to reproduce. This makes the virus vulnerable to attack by the immune system. No known virus has been shown to withstand or develop an immunity to electrification.

Shortly after the experiment, on Nov 16, 1990, Dr. Kaali filed for U.S. patent #5,139,684 for an implantable electrifying device meant to inject current into the blood and it was subsequently granted on August 18, 1992. When reading the following reprint of claim #1 of the patent, keep in mind that before a U.S. patent can be granted, the device has to work as claimed....

After the syposium, within the only three places this information wasever published, the discovery was praised by these doctors. You would think a discovery this big would be in every major newspaper, television station and magazine in the world!

"What we have done is expose the AIDS virus in laboratory circumstances to electrical current and then incubated the virus with white blood cells susceptible to the virus. We found that the virus became much more ineffective," - The Houston Post on Mar 20, 1991, (full article here)

"Their experiments, described March 14 [1991] in Washington D.C., at the First International Symposium on Combination Therapies, showed that the shocked viruses lost the ability to make an enzyme crucial to their reproduction, and could no longer cause the white cells to clump together - two key signs of virus infection."-Science News(Mar. 30, 1991 pg. 207) (full article here)

Suddenly and without sufficient explanation, they denied their claims and in the Longevity article Dr. Kaali said "it will take years of testing before a virus-electrocuting device is ready for use." Seeing as how this technology could be replicated by the average teenager, the doctors were obviously pressured into silence.

Later, Dr. Bob Beck found these articles, researched Dr. Kaali's patents and built devices to replicate these findings on himself and volunteers. As his research continued, he added three complements to the electrification treatment and has been promoting them as a four-step protocol ever since. The testimonial results from this protocol are astonishing.

"My personal story is that I was '90% dead' when I weighed 290 pounds (I now weigh 145 pounds). My hair had fallen out, and it has grown back; my libido was shot; my prostate was shot. Using this technology, I have taken 35 years off my chronological age (I am 72 years old), and all you have to do is see a drop of my blood and you will believe it. And there are no side effects. I know I would be dead now were it not for this program. So, I really do feel that I have been called to do this. I now weigh half what I used to weigh. When the parasites are all removed from the blood, you lose weight, because the parasites are using your body. They set your appetite so that everything you eat is stored for them to have a meal." - Robert C. Beck in Leading Edge Magazine

In the next post we will begin to share Robert Beck's Protocol and the units he designed to improve our health naturally and at a low cost!

To Your Vibrant Health

Posted by Dr Charles J Pace ND at 6:03 AM No comments:

Even scientists who helped develop the Smallpox vaccine THEY ARE NOT GOING TO TAKE IT AND URGE THEIR FRIENDS AND FAMILY NOT TO TAKE IT EITHER, says Wayne Madsen, an investigative journalist and RT contributor.....
Just Say Boo To The Flu
Yes, you can now say Boo to the Flu and most any pathological problem caused by viruses, bacteria, fungi, amoeba, and most any microbial infestation of our blood stream with the use of the current from a 9 volt battery!
Yes, Dr. Robert Beck has developed and tested a blood electrification unit that is a simplified copy of a patented medical procedure used in the past but now supressed that electrified the blood with a very low amperage through a surgically implanted electrode in the forearm! Beck's device is non-invasive and works by placing the electrodes strategically over the arteries of the forearm at the wrist and electrifying the blood through the skin. This low current electrifies the blood and causes the pathogens in the blood to be electrified as the blood circulates past the electrodes, killing viruses, bacteria, fungi, amoeba etc.
In our next post we will introduce you to this tested and proven method of destroying all pathogens in the blood by electrification with micro-currents of electricity. This medical procedure has been suppressed, why, because it works 100% of the time and THAT is a threat to the pharmaceutical companies who find sickness and disease big business!
To Your Health
Posted by Dr Charles J Pace ND at 10:10 AM No comments:

DISCLAIMER: We are not medical doctors and so the information made available in this blog is not intended to be understood as medical advice. You are responsible for your health and what you choose to do to your body is your sovereign right and responsibility. If you are suffering from disease or any infirmity, you are advised to consult your doctor. This information is merely for research purposes only and we are not liable for any action(s) taken by the reader based on what he/she has read in this blog. Any and all claims made on this blog where not directly quoted and referenced are my own opinion and should be treated as such and should not be understood as medical advice. The views and opinions expressed on any video on this blog are not necessarily the views and opinions of the blog-author or of the blog-host.

FIGHT the FLU with SOTA